Cupping is a type of alternative therapy that originated in China. It involves placing cups on the skin to create suction. The suction may facilitate healing with blood flow.
Proponents also claim the suction helps facilitate the flow of “qi” in the body. Qi is a Chinese word meaning life force. A famous Taoist alchemist and herbalist, Ge Hong, reportedly first practiced cupping. He lived from A.D. 281 to 341.
Many Taoists believe that cupping helps balance yin and yang, or the negative and positive, within the body. Restoring balance between these two extremes is thought to help with the body’s resistance to pathogens as well as its ability to increase blood flow and reduce pain.
Cupping increases blood circulation to the area where the cups are placed. This may relieve muscle tension, which can improve overall blood flow and promote cell repair. It may also help form new connective tissues and create new blood vessels in the tissue. 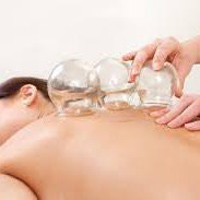 What are the different types of cupping?

Cupping was originally performed using animal horns. Later, the “cups” were made from bamboo and then ceramic. The suction was primarily created through the use of heat. The cups were originally heated with fire and then applied to the skin. As they cooled, the cups drew the skin inside.
Modern cupping is often performed using glass cups that are rounded like balls and open on one end.

There are three main categories of cupping performed today:

Looking for Hijama service? Why do not try our excellent cupping service?

What is Wet cupping (Hijama)?

During many centuries Chinese use of this method was limited to certain medical complications like lungs infection, colds, to treat internal organs’ disorders, joint pain, etc. But between Arabs and Muslims benefit is much greater than that and they use this method as a safe, non-invasive and economical way of curing and preventing many diseases.

The word ‘hijama’ means ‘drawing out’ in Arabic. It is now being recognized as an alternative medicine or alternative way of treating different diseases and bodily disorders. Some sections of the modern medical community also endorse the various benefits of hijama and even encourage its practice for certain diseases.

In this non-surgical procedure, toxic or ‘bad’ blood is drawn out from the body. Certain ‘hijama points’ on the body are addressed to do so.  On such selected points, blood is encouraged to accumulate and then sucked out by using a little vacuum system.  The blood is made to accumulate on the surface of the skin where minute incisions are introduced on the skin; the blood comes out from the incisions and is collected in a cup from where it is removed.

It is noted that wet cupping or hijama promotes the flow of energy in the blood.  It removes toxins and other waste material from the blood.  It helps hasten recovery time for people recovering from certain diseases.  Hijama is known to prevent many diseases like High Cholesterol, High Blood Pressure etc and, therefore, can be considered one of the best preventive measures against many diseases.

Cupping is fairly safe, as long as you go to a trained health professional. But you could have these side effects in the area where the cups touch your skin:

Also Cupping therapy isn’t recommended for everyone. Extra caution should be taken for the following groups: